What Are The Symptoms Of Ovulation? 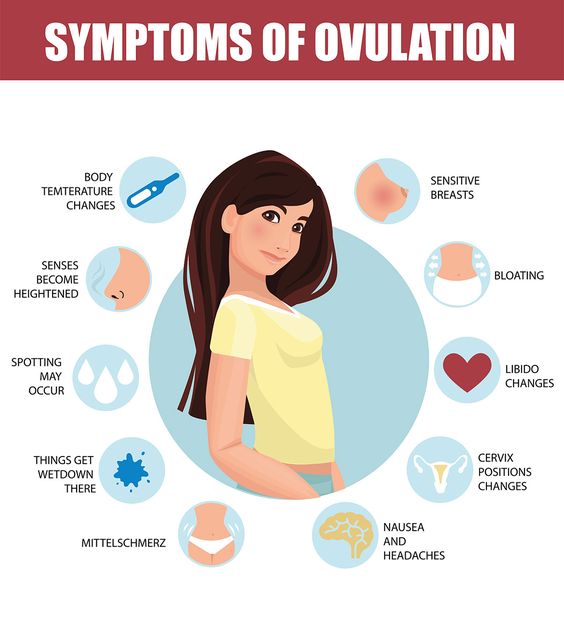 In order to conceive, it is important that you know about your ovulation. It is best for a healthy baby to become pregnant at the time of ovulation. There are five symptoms of ovulation that every woman undergoes every month before her menstruation. Ovulation occurs when an egg is formed in the ovary, which goes down the woman’s Fallopian tube. This egg is now ready for fertilization to conceive. If the woman does not attempt to conceive during this period, this egg is absorbed by the uterus and then passed out during menstruation. So, see below the Symptoms Of Ovulation.

There are certain changes that may occur in women during ovulation, and it can be the sore breast or a rise in the basal body temperature. But you would not be able to figure out when it is perfect to get the pregnancy, as the pregnancy window would appear in every ovulation. You may need the ovulation calculator to perfectly spot your pregnancy window, as it would be perfect to manage your pregnancy process. Sometimes you may want to avoid pregnancy due to some reason, and you may be happy to have online help in this regard.

Women do feel anxious when they conceive, it can be overwhelmingly welcomed by the women to regulate their pregnancy time and life. The ovulation calculator is one of the most impressive and easy-to-use tools to regulate your pregnancy. Couples finding quite amazingly supportive for managing their life and when to conceive and when to avoid it. Couples in our time do like to plan everything when they are planning to get a baby. They usually try to make every possible preparation, so the health of the fetus and the mother would not be disturbed.

(Also Read: Can You Get Pregnant While Having Sex On Your Period?)

During this period, a woman’s body undergoes many changes. This is the peak time of the month when a woman is fertile and can plan pregnancy. Doctors say that five days before starting ovulation is the best time for you to engage with your partner. This is known as the ‘fertile window‘. Doctors recommend having sex before ovulation because sperm can stay inside the woman’s body for a few days and it is better to wait for the egg. But how do you know when you are ovulating? The way to find it is very simple, read this article to know the signs and symptoms of ovulation!

How Long Does Ovulation Last?

It is easy and beneficial to conceive during ovulation. We are telling you some signs that we may know that the woman is ovulating. There are also some changes in the body of women at the time of ovulation, based on which the days of reproduction can be estimated.

When you are ready for conception, during that time your cervix is ​​up, softer and more open. At this time there is a change in cervical mucus or vaginal discharge, this is the first sign of ovulation. During this time, estrogen levels increase and the cervical mucus becomes thick. It may look like egg white and is good for sperm. You can see this mucus and know if you are ovulating. Place it between your fingers and see if it is different. The change is quite different from your normal cervical mucus.

You may feel more in mood during ovulation due to high estrogen levels, the main reason for increased sex drive. However, feeling of increased sex drive is not entirely due to ovulation. Similarly, there is a chance that you do not feel an increase in sex drive at all. But again, this does not mean that you are not ovulating.

In some women, breasts become fragile before ovulation. It is caused by the growth of hormones in the body. These hormones indicate that you are potentially getting ready for conception.

The period around ovulation and ovulation is when your hormones increase. During this period, you are likely to experience sensitivity and tenderness of the nipples and breasts. This can be felt in the days leading up to ovulation, during ovulation and after it has ended.

(Also Read: Symptoms That Confirms You Are Ovulating)

Another sign of ovulation is over-discharge. It occurs immediately before and during ovulation. During this time your body produces the most produced discharge.

Symptoms Of Ovulation: Pain During Ovulation

Not everyone may have an ovulation pen but some women experience pain while ovulating. When an egg is released from a follicle on your ovary, you may experience some pain. In some cases, a fluid may enter it and feel like a cyst burst. Some women do not feel it all; Some may feel cramped and some may feel pain like appendicitis.